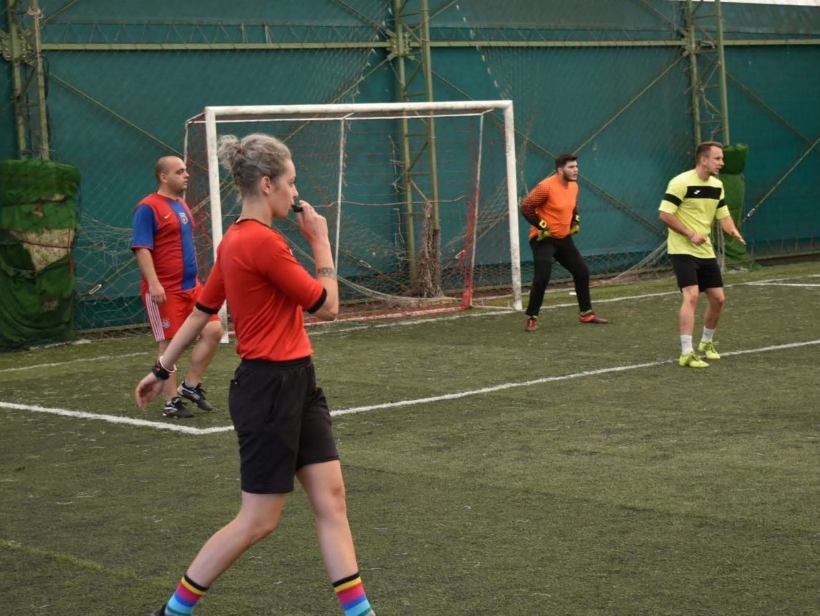 The idea of the TInnGIDLab Alba Iulia team generates a national premiere in Romania:

There is no place for gender differences  in sport, in general, and on the football field, in particular – this was the idea of the organizers of a unique football tournament that took place on 17 and 18 July, between 9 and 17, in Alba Iulia.

At the start line there were 20 teams of 6 players each, divided into 4 groups and the matches were played in knockout system and were all led only by women referees.

Catalin Costea, the main organizer of the tournament says that “Beyond the consistent prizes offered, the socializing and the fun that such an amateur football tournament includes, by itself, we also have this special situation in which more than one hundred men involved in the matches “let themselves be led” by women, women referees. It is a proof of openness and evolution, not only in sport but also in terms of fighting stereotypes, gender or otherwise.”

The idea that all the matches to be refereed by women, even if the teams were formed all of men, came from the RoHub  TInnGO project team, implemented by Alba Iulia City Hall, one of the partners in the organization of the tournament. The project campaigns for the promotion of women in the area of smart mobility, in transport and in modern society in general.

“The initiative is even more special as we are talking about a first-time, a premiere in Romania. Sport, football in our case, means – without any doubt – a form of mobility and the fact that all matches were refereed only by women also says a lot about the fact that in Alba Iulia preconceived ideas have long been overcome and that we are in an era of normality as it is perceived in more advanced EU countries” says Ioana Baba, project manager of the Transport Innovation Gender Observatory (TInnGO) project.

Miss Ariana Iosa, one of the referees of the tournament, states that “I’ve never seen things like us versus them, women versus men. What one can do, the other can do, too and the rules are the same for everyone. So it wasn’t hard for me and I didn’t hesitate for a moment to accept the TinnGO’s challenge of refereeing in an all-male football tournament, even an amateur one”.